According to the Japanese tradition, it is said to be a kind of philosophy that states that something beautiful is transient and imperfect. Wabi-Sabi, the combination of two words that come up with a new definition, is a philosophy that is coming up by the Buddhist teaching of ‘Three marks of existence.’ Here the Three Marks of Existence are namely ‘impermanence,’ ‘suffering,’ and ’emptiness.’ If the Buddhist point of view is considered, it explains that Life and Art are both beautiful and enchanting but not due to the point that they Perfect or immutable but due to the fact that they are imperfect and transient. When there is a slight gloomy ambiance created around you while understanding this concept, that is when you have begun to know what Wabi-Sabi actually is.  The acceptance of the fact that life is not perfect and permanent but is full of hardships, suffering that there is nothing which would last forever, the things, in reality, are hard and roughly shaped, is what the Japanese philosophy of understanding about natural processes and pleasures.

Unlike Western culture, where beauty is perfect and well-shaped, the processes in life should be symmetrical and end up with a fine finish. The Japanese philosophy of beauty in imperfection leads to the gateway where on realized the hard facts and figures out what is a real beauty.  MEANINGS AND INFLUENCE OF THE WABI-SABI AESTHETICS  These two words, when not combined, end up of different meanings with nothing left in common as the term Wabi would stand to explain the despair of living in nature or being distant from the society. Whereas the other half of the term i.e., Sabi, actually means shriveled or dry. As time flew at some point during the 14th century, there were some different meanings for the same words, and the term Wabi now explained the good and affirmative aspects of living alone in nature, an explanation to simplicity. The term Sabi after that describing the beauty in aging, the experience which is understood by the scars. This optimization in the meaning of these two words and coming rapidly in the limelight was due to Buddhism. Buddhist society in the 14th century was greatly influenced by philosophy, and they saw this theory as a great booster towards enlightenment. 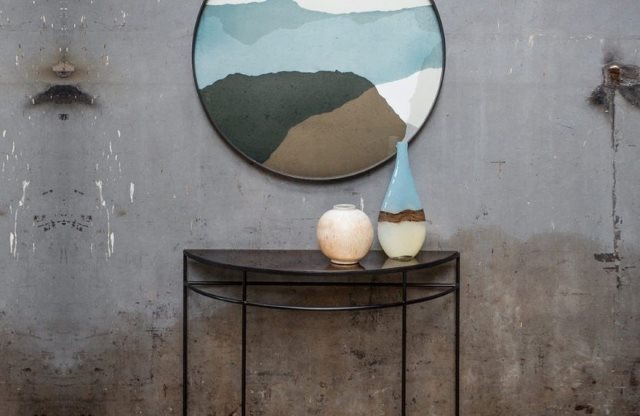 Though there were several engulfed artistic approaches, which were the effects of the Chinese culture, eventually, Wabi-Sabi was adopted as the distinct Japanese traditional aesthetic. Looking more deeply into this philosophy, if we consider an engineer’s view to look upon the meaning, then the term Wabi would be understood as imperfection in the quality of some object, and the term Sabi would define the not so perfect dependency or mortality of an object.  In Japan, the philosophy of beauty is imperfect, and transient is so omnipresent that one would very rarely observe it. They are present everywhere, from the smallest to largest possible examples one could take in Japan. Philosophy is wide notices in the pottery, which is used for the drinking tea, in the materials used to construct the temple of Kyoto, including the gardens and also the old faces of older people, which represents the experience and change in the century.

INFLUENCING THE JAPANESE ARTWORKS this philosophy highly influences not only the lifestyle of human beings but also the art and design. One could find them in many of the Japanese artworks in the form of different philosophies such as Zen and Mahayana. These two are an example of beauty in imperfection ‘wabi-sabi’ aesthetics. This Japanese traditional aesthetic is a very vast topic of discussion in many of the conferences regarding designs as well in different renowned art galleries. The presence of this aesthetic is almost all over the magazine, which is related to decoration, fashion, and design, both domestic and international.  As this Philosophy is said to be having a taste of desolation, but it’s involvement and influence on little things have made it an experience of delightfulness in reality, in roughly shaped edges, in flaws of objects, etc.

This Japanese aesthetic is the predecessor of the present modern theory that lies on the facts of perfectly finished places, smooth and creamy architectural beauty, which is exactly the opposite of its predecessor that explains that modernism is nothing natural and real but clearly a technical mask of creativity. Some of the Japanese artwork in which one can notice the aesthetics clearly are listed below: