‘How many oceans are there in the world’ is often a common question. Oceans are the largest known water bodies of the earth and are filled with saline water. These are the significant portions of the earth’s hydrosphere and cover nearly 71% of the earth’s total surface and 97% of the total water surface of the planet. There are five oceans on earth that are spread over an approximate area of 361,000,000 sq. Km in total with an average depth of 3700 meters. With limited exploration, we have still discovered over 230,000 species in the World Oceans with more still hidden in its depths.

It is by all statistics the largest known water body on earth. With an average depth of 4000 meters, it is also the deepest of all the existing water bodies on earth. The Arctic Ocean limits its boundaries in the North and the Antarctic Ocean in the South. The American continent covers it on the eastern side, and Asia and Australia limit its western boundaries. It covers a total water surface area of 165,250,000 sq. Km – approximate 46% of the total water surface on the planet. It also extends over 33% of the total surface of the earth, and that means its area is more than all the landmasses combined. The Pacific Ocean is home to a lot of wonders and secrets of the planet. The deepest known point of earth, the Mariana Trench, is situated on the western side of the North Pacific Ocean. Its depth stands at 10,911 meters. The ring of fire is one of the biggest features of the ocean.

It is the saltiest known ocean of the planet. The Atlantic Ocean covers nearly 29% of the total water surface and about 20% of the entire earth’s surface. It spread over an area of 106,460,000 sq. Km and is the border between the new world and the old world. This ocean is stretched over an S-shaped basin and is bordered by Africa and Europe in the East and the American continent on the west. It is the source of a lot of rivers on these four continents, and this stretch makes it one of the most sought routes for traveling. It is connected to the Arctic Ocean in the North and the Southern or the Antarctic Ocean in the South. The Indian Ocean covers its boundaries in the South-East, and the Pacific Ocean is interconnected to it in the South-West sections. It has been the home to a lot of scientific explorations. It is home to the world’s largest island – Greenland and the infamously mysterious Bermuda Triangle.

In terms of size, the Indian Ocean ranks third among all the largest known water bodies of earth and extends over an area of 70,560,000 sq. Km. That stands to 20% of the total water surface area of the planet. The Asian continent or, more precisely, the Indian subcontinent bounds it on the North and Antarctica in the South. Africa forms its western boundaries and Australia its eastern borders. Originally known by the name of Sindhu Mahasagar during the ancient times of India, it covers the Persian Gulf and the Red Sea. The Indian Ocean has an average depth of 3741 meters. Its location provides the regions with a lot of variations in climate. Monsoon dominates its portions in the North of the equator due to the strong winds from the north-east, especially in the months of October to April. The South and west wind control the weather from May to September. It is generally milder in the southern sections, but Mauritius summer storms can be extreme. The changes of the monsoon winds bring in cyclones to the Bay of Bengal and the Arabian Sea at times.

The Arctic Ocean encompasses all of the world’s oceans from the North. It is the shallowest and smallest of all the five oceanic bodies on the planet. North America and Eurasia surround the Arctic Ocean as most of it are located in the polar regions of Arctic Circle in the North. It is partially frozen in summer and almost entirely in winter. The salinity of this ocean varies as per the seasons. The melting ice contributes to reducing its salinity. Also, a lot of freshwater rivers flow into this ocean that works to keep the waters fresh. At any point in time, it is the least saline oceans of the earth, thanks to the low rates of evaporation.

Defining this water body as an ocean has been a topic of debate among many nations. More commonly known as the Southern Ocean, it is interconnected to most of the water giants from the southern sections. It encompasses Antarctica and is the fourth largest water body on the planet. It is located where the warm waters from the sub-Antarctic regions mix with the cold waters from Antarctica that flow north. Antarctica is the home to the geographical South Pole and is a rich choice for a lot of scientific and geographic explorations over the years. Scientists are also trying out ways to analyze the ice from great depths in this region to know more about the changing weather of earth over the past.

If you want to know how many oceans are there, then the answer can vary depending on the definition of the Antarctic water body. But with its inclusion, the answer is – there are five oceans on earth. 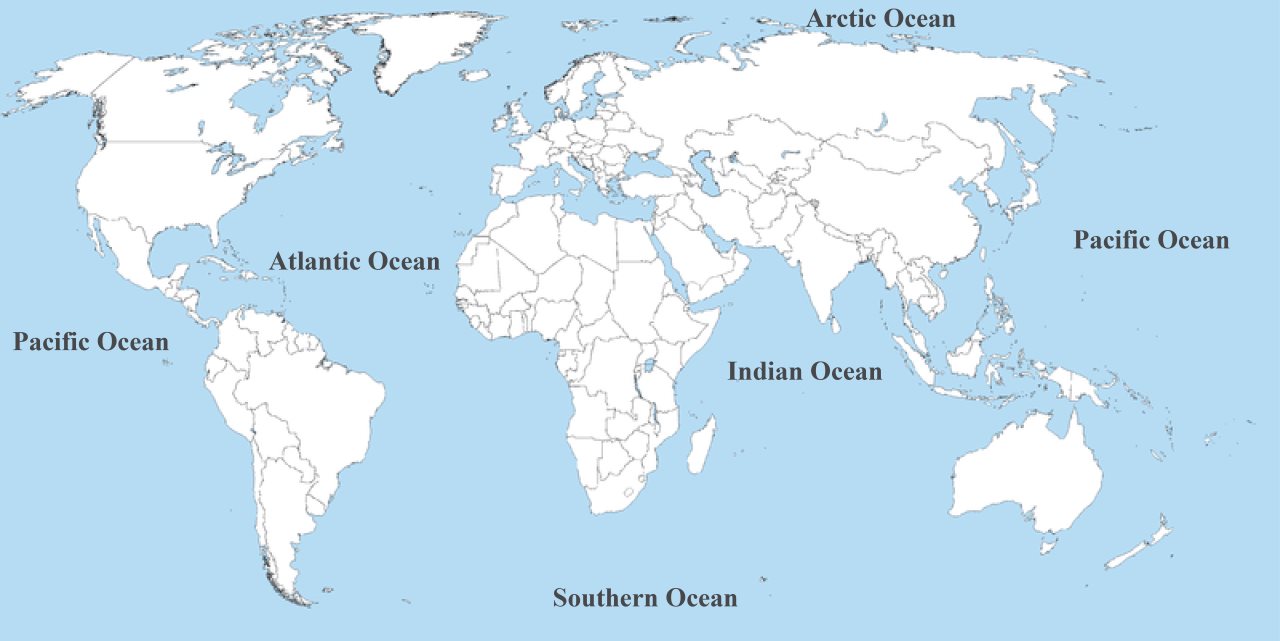 One Reply to “How Many Oceans Are There?”