Cigars vary in quantities, flavor, character, and qualities, with the newly founded companies coming up with different types of products it is important to know the top best among the rest. Below is the list of the top 10 cigars in the world.
10. The Bolivar Belicosos Finos Cigar – A price of $13/stick and $260/ box

It has a very nice taste, slightly sweet with cocoa, pepper flavor.

It has an awesome smoky flavor, with satiny wrapper

This a well-filtered cigar, with of the best flavor and smoke.

These are quite large cigars, it is made in Nicaragua. It has a very lovely and sweet flavor of cocoa. It is carefully produced by the top masters of cigar makers

Manufactured by Arturo Fuente, one of the top cigar makers. It is about seven inches is size. It is quite difficult to find as the number of the fan base is very huge right now. Each stick is about $55

For this kind of price, it is most affordable by royalty hence the name. It is plated with 24 karat gold. It can be personally customized with one’s name imprinted on it.

4. The Fuente Don Arturo AnniverXario, a price of $78/ stick

This brand of the cigar was produced in memory of the president of the company’s father. It is a box of about 46 sticks per box.

The size of a stick is about 7.5 by 52 inches; it is one of the rarely produced cigars in the world about only 100 boxes per year. Several years pre-orders are already filled making it less available. These were originally sold to dignitaries around the world. 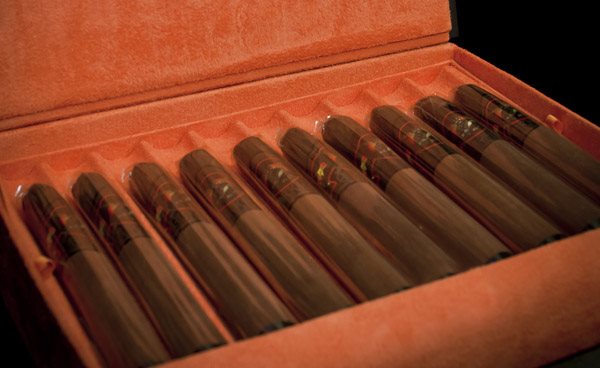 These cigars were made from Connecticut broadleaf Maduro wrapper, Dominican filler with a Cameroon binder, they are usually placed into a leather box with sets of layer velvet, it has a ring size of about 52 inches a length of 8.5 inches, with a soothing flavor

This was auctioned for a price of about 507,000$.  It was discovered in Guatemala. It has been highly preserved.